Korine is currently also working on a number of new songs in cooperation with other musicians. 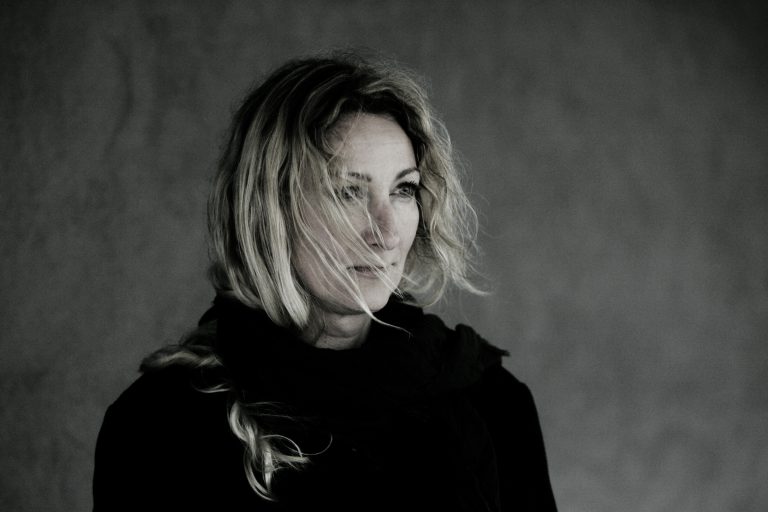 Extract from interview with Korine, by S. Douglas, Jan. 2020

What is your musical background and have you always been involved in Music?

I grew up with a dad who loved classical music and a mum who loved Cliff Richard. I remember listening to the radio was a favourite thing to do. Every Saturday morning my father tuned into a programm called “Arbeidsvitaminen”. I loved it. The first single I bought was from Blondie. But I completely devoted myself to ABBA when I was about 7 years old.

What I remember was enjoying singing so much at a very young age and that I tried to write lyrics with the help of an old dictionary, as good as I possibly could for a ten year old.
One of my favourite things to do some time later I remember was making my own stars-on-45 tapes (Does anybody remember this music?) By using two portable cassette recorders and a mic you could make some awesome music yourself! Who needed the “Eddy Go Round Show” or “Arbeidsvitaminen”?
One night in 1976 my parents woke me (still very grateful for that because they created this wonderful memory!) and I watched Dancing Queen on a late night tv special sitting on my father’s lap and I was in “Aw” constantly since then. I made sure I got to know everything about those four and have all of their music. I would decorate my entire bedroom with every item I could find. I wallpapered ABBA posters and out takes from music magazines (even the tiniest picture wasn’t wasted on me and got glued with utter respect and pride to the perfect spot) every where in my room and on the ceiling. I was completely under the ABBA spell.
As soon as I was old enough I began to play the recorder which must have sounded awful – I remember my sister covering her ears and begging me to stop – but hey! I learned to read some basic notes. My grandfather always listened (Poor man, he did without earplugs) and encouraged me often called me “His child prodigy”.  He was so proud of me and I will never forget that.
The piano, too, had hugh appeal to me. So the piano followed – in my mind that is – because an electronic organ would do too according to my parents and because it came with headphones something the neighbours at least appreciated.
I enthusiastically took a few lessons. I never practiced so after some time the organ unfortunately became an untouched piece of furniture. I kept on singing but it was not until high school that people other than my parents like my musical teacher could notice I loved it. However, I didn’t want to join a choir or such. I really didn’t had the courage. I’d rather be sitting in my room sang along with cool songs.
Through the years off and on I took some singing lessons and sang in several bands. The first song I wrote was Phenomenon and in a band called Angels Of Silence I got the chance to perform it. After the Angels split Alex Elzer (co-writer Kae) and I met and we started writing songs together for the project we called Silent Project Cooperation which soon let to the birth of Kae in 2011.

What genre would you consider your music?

I think in the alternative dark/pop/rock genre.

I really don’t know if we’re going to fit into the Dutch music scene with this song or any of our songs, let alone where. More and more the Dutch music scene tries to change into a scene where músic is standing in the middle of the attention again, regardless of genre, age or class and I think that is a good thing. The Dutch scene is not only consisting of people who aren’t done yet with The Voice of Holland. Making music is something you do, and is not something you do and use for becoming immensely famous – including the jury and at the expense of the contestants- but, as we all know, that does still happen very very often! A lot of musical venues were forced closures due to lack of artists or to budget cuts and that is such a shame. The music scene is one to enjoy live, if you can. Music is there for you to experience the very moment and the lyrics are there to listen to so you know. And so it should be.

Who are your musical influences?

“After” ABBA I listened to Madness and Doe Maar – a Dutch Ska-band performed relevant music – a bunch of very cool guys, still good looking today and still performing 40 years later – Madonna and Michael Jackson. But there had to be more, right? At that time I really liked sounds in minor, I still do and they strangely make me very happy. The green “record van” at the corner of the library saved me I think. Among others I discovered Black and eventually Portishead, Sparks, The Smiths and Morrissey. (Where have they been all that time?)

Musically what are you most proud of?

I think of the cooperation with all musicians. If it wasn’t for them I couldn’t have been doing what I am doing today. The very first time “Phenomenon” was played by Kae also happened to be the very first song I wrote is also a highlight to me.

Many of your songs have serious content is that intentional or are you just a serious person?

I try to not take life too seriously but I often fail. As I look around and I see bad things happening. Children being molested at the playground. Children who suffer so much they take their own life. Animals being abused and murdered for humanity. How can you not take that seriously? Someone once asked me why I am mostly showing up with melancholycal songs while I am actually a very optimistic person. I just can’t write about love when I see so much dishonesty.

What are your future projects with KAE and do you see any live dates with the band on the horizon?

Currently we focus on the recording of an ep containing 5 songs. The line-up is completely new and we need time to finish the product as good as possible. After the release we might get a possibility to climb back on stage but this depends on whether the ep will be appreciated or not. We’ll have to wait and see.

Also, to mark the 10th anniversary of the ep “The Omen” we will reissue the title song from the album next month via Phonotograph Records.

I was very interested to see the line up of KAE included your 18 year old son Kay , how does that dynamic work and do you think it inhibits either of you in any way?

I could never have predicted that myself haha! But I am very happy he is on board. Last year I had to look for a second guitarist and Kay was standing right in front of me. The thought pondered asking him. The average age within the band is higher than 25

and this could mean worlds being to far apart. I wouldn’t either want him to join in just to help me out. Most importantly, Kay is a college student and the scarce free time he has got should always be spent the way he prefers. Joining a band is awesome but always comes with obligations. During rehearsing, discussing band affairs and making band decisions I am not his mother. And that seems to work out well. By keeping the distance that way we could all relate to the same level which will mean a healthy balance between all band members. In good conscience, I’m very happy with this line-up.

What’s the message you are trying to send to your audience?

I try to convey what is important to me and when people can connect with the song and subject I am more than happy. Staying true to one self is a hard thing to accomplish these days. It is mainly all about the outside – music business included. I could easily climb on stage dressed in a garbage bag when I feel I’m being treated like rubbish or in a jute bag when I think I’m having a bad hair day or so just to make a statement. But that would be all it is.

My favourite song you have done is the Demo version of a fantastic song Did you get what you came here for , do you have any plans to do a full studio version of this song?

Thank you so much, Stuart. Yes! I think it is going to end up on the EP – at last!

Scroll back to top